You are here: Home / Association / History 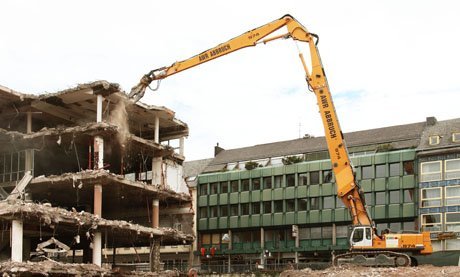 The European Demolition Association was founded in 1978. As the world around us has changed, the demolition industry has also evolved significantly. The word demolition may be defined in the same way on dictionaries, but our work is done on a completely different way.

The technical part (machines, tools, resources…) evolved to heights we could not even imagine 30 years ago, but also the paperwork and the surrounding aspects of the job site.

Waste is now a major issue and will be even more on 2011, as most of the countries implement on their national regulations the Waste Framework Directive 2008/98/EC.

EDA, as the platform that brings together the demolition industry, has also progressed on these years.

The Board of EDA represents this progress, with members from all over Europe, some of them already the second generation of demolition companies.

On January 1st, 2011 EDA changed its address to the city of Brussels, just across the street of the EU Commission, as a way to come back to the origins.

EDA did a great job in the past supporting countries that did not have a national association, plus gave interesting contents to international meetings, where the expertise from different demolition companies could be shown.

Brussels is also our way of saying that we want to be closer to the administrative and legislative head of the new Europe.

At the same time, we want to support a better and new way the national associations, helping them with those items that affect all of the members.

These changes reflect the willing of EDA to go with the times, to look for new ways of sharing knowledge and to create networks of companies and professionals.