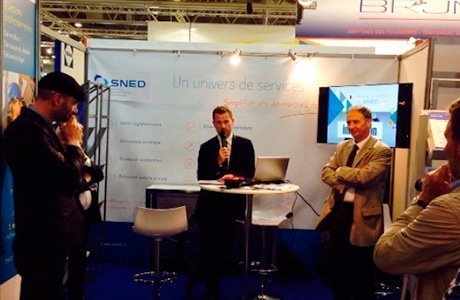 The French Demolition Association, SNED, participated actively in the trade fair INTERMAT 2015 as a co-organizer of de Demolition Day and with the presentation of the preselection to the Innovation Award, a price to be delivered on 29th May in its Annual Convention.

The Demolition Day was held on Monday, April 21st, with a series of presentations about environment, demolition, and asbestos removal, and also with interesting workshops, about these same topics, with participants from all over Europe.

Also during the trade fair, the Board of SNED presented the pre-selection to the Innovation Award, a prize created by the French Demolition Association that will be delivered on May 29th, in its Annual Convention (Recontre des Métiers).

Finally, during the INTERMAT 2015, it was time also to celebrate the Board meeting of SNED, where representatives of the European Demolition Association were invited to present an overview of the industry at European level.

INTERMAT 2015 has cemented its international focus with 35% of visitors coming from 168 countries including from the Middle East, North Africa and Turkey, which all performed particularly well this year.

For the 1,410 exhibiting companies with high expectations of this three-yearly event, INTERMAT 2015 offered an opportunity to prepare for the future.