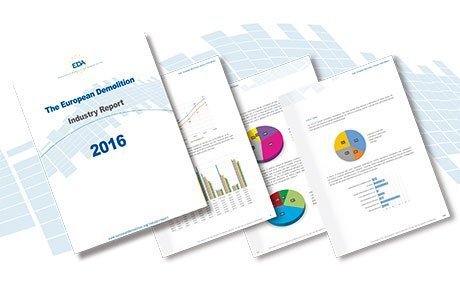 After the resounding succes of the European Demolition Industry Report 2015, which can be ordered here, EDA launches the edition of 2016, which contains new developments but keeps the same aim: getting solid data and statistics about this industry.

Following the work done in 2015, EDA would like to create a reference methodology to analyze the industry trends of each country and the overall development of the industry in Europe.

For this reason, a new edition of this report will be launched in 2016.

In order to gather the information from contractors, EDA designed a two-phase survey.

Answering the first phase, in order to thank participants for the time spent answering the questionnaire, EDA would provide those who answer the survey with a 20% discount on the Conference ticket of the EDA Annual Convention that will be held on June 9th – 11th, 2016 in Glasgow (Scotland).

Answering the second phase, EDA would provide those who answer the survey with a 30% discount on the Conference ticket of the EDA Annual Convention.

Additionally, EDA will give those contractors a 20% discount on orders of the European demolition industry report 2015.

If you have answer phase 1 survey, the discounts provided will be accumulated.

The survey has been translated to several languages to avoid mistakes and misinterpretations.

The gathering of information will last until 20th May, and the report will be published by October 2016.

All responses to the questions are anonymous, no identification data of the company is asked, and an overall analysis of the data will be made.