The 24th Demolition Conference, which was held in Berlin on Friday, 2nd of March 2018, was once again the important annual event of the industry and a full success for the German Demolition Association, DA, and all involved persons.

“Once again, a further increase in the response to this conference can be recorded. More than 900 participants from 15 countries and exactly 115 exhibitors this year underline the fact that the Demolition Conference is the largest of its kind in Europe”, DA Managing Director Pocha welcomed the guests.

This steady growth requires a rethinking, so that the upcoming anniversary event on 15th of February 2019 will take place in the location “Station Berlin” for the first time. The whole conference will be located completely under one roof including the dialogue evening and hereby sets off for new shores.

The DA is already looking forward to the new challenge and hopes for the loyalty of the participants and exhibitors. 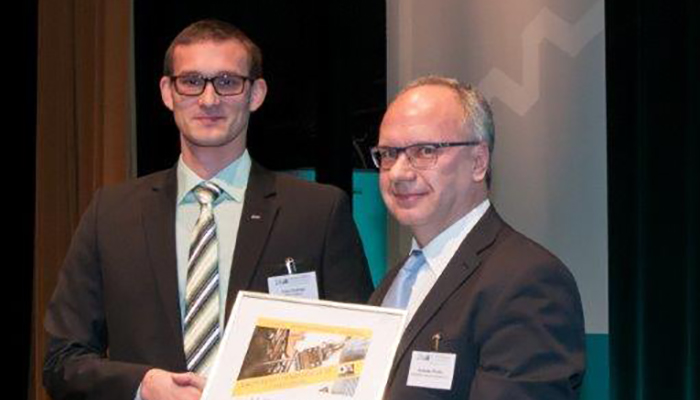 For the first time, the German Demolition Association announced an Innovation Award at the conference. Mr. Dubrau was the winner of the award, worth 2,000 Euro, for his bachelor thesis with the subject “Development of a solid brick using RCM sand from masonry” at the Brandenburg Technical University in Cottbus.

The former NRW minister of state and state chairman of the NRW SPD, Michael Groschek, opened the talks by giving the keynote on the topic “Future ideas for living and building – an opportunity for demolition”. In his lecture he illustrated that the chance for the preparation of land for building and therefore urban renovation would not be possible without the demolition industry. Mr. Groschek impressively demonstrated how much potential for the industry is currently available in various bridges and real estate remediation in Germany. Hereby, he presented the opinion of many present experts and contractors. 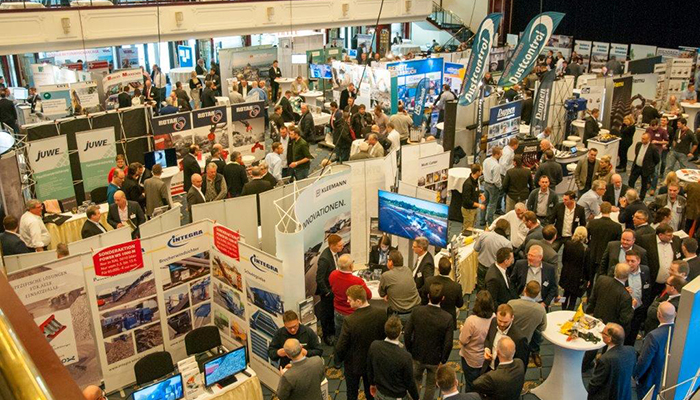 The further presentations at the conference covered the wide range of topics of working fields in the demolition industry.

Mr. Appel and Mr. Veerst from the company Ettengruber reported about “Demolition extreme in the heart of Munich”. In the case of continuous use by tenants it was necessary to deepen the individual basement levels in four multi-storey houses in a passage, enlarge them and assemble them into an unified, spacious building in a period of nearly three years. A mammoth task that could only be solved by the perfect interaction of many players.

The president of the French demolition association SNED, Mr. Cornet-Philippe, spoke about dismantling of a bucket wheel excavator on the Seine. This lecture showed once again the diversity of the demolition industry, how flexible the industry has to be in all circumstances and how often new challenges are faced.

With the title “300 tons of sprayed asbestos – extensive remediation using the example of the high-rise building Deutsche Welle” Mr. Maurer from the company BST Becker Sanierungstechnik GmbH showed how complex a professional remediation of high-rise buildings, which possess a steel construction with a coating of sprayed asbestos and which represent the common practice of the 1960/1970s, nowadays is. Especially in this case the example shows the complexity of such a project due to the size of the three high-rise buildings including a three-storey basic structure with a total cubature of approx. 350,000 cbm enclosed space. 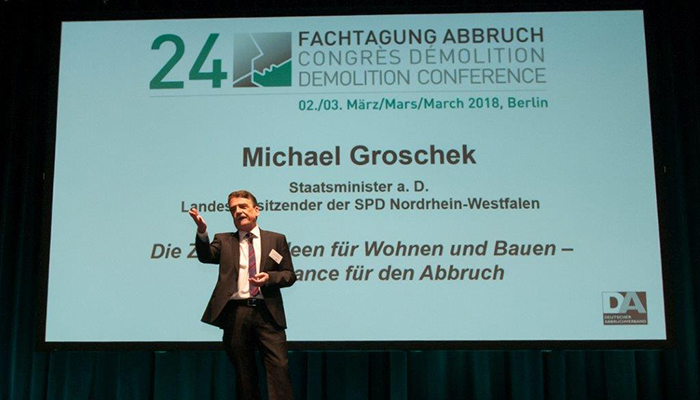 In the last year, the DA itself developed a working support paper on demolition statics for its members, which was presented by Mr. Jünger of the engineering office Jünger.

He explained the importance of this topic in the context of all tenderings and how the contractors should deal with it.

The conference participants commented very positively on the compact and technically diverse programme with parallel industry exhibition, which showed a wide range of products to interested trade visitors.