You are here: Home / Communication / News / Level(s) – a sustainable buildings framework for all 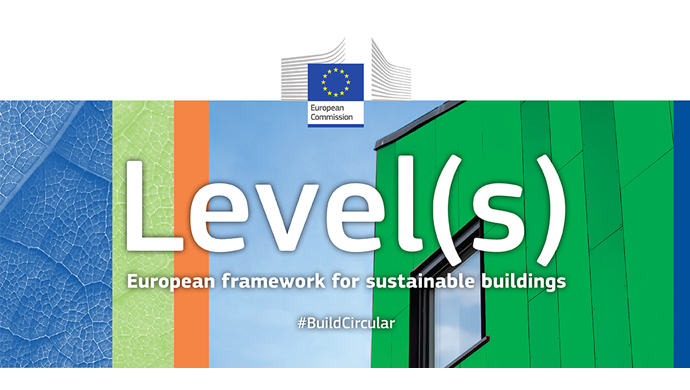 Level(s) is the first-ever European Commission framework for improving the sustainability of buildings, living by the values of flexibility, resource efficiency, and circularity, whose framework will be officially launched in October-November 2020.

The EU aims to lead by example on the issues of sustainability, circularity, and zero carbon emissions. Further fuelled by the health and economic effects of the COVID-19 crisis, 2020 is proving to be “the” year for Europe’s green transition.

The EU Green Deal, launched in December 2019, gave the motto for the EU’s climate-neutral ambitions. The new Circular Economy Action Plan, launched in March 2020, sets the agenda for sustainable growth, making the EU economy greener while maintaining its competitiveness and securing new rights for consumers.

The Circular Economy Action Plan takes this one step further by mentioning Level(s) as a framework for construction and buildings to increase sustainability, with important implications for areas such as Green Public Procurement.

“The concept behind the Level(s) framework started to take form once the building sector became a key area of action for the European Commission in terms of resource efficiency and circular economy”, recounts Kestutis Sadauskas, Director for ENV.B – Circular Economy and Green Growth at the European Commission’s Directorate-General for the Environment (DG ENV).  “We realised that, to truly achieve sustainable transformation in the building sector, we need a common language that not only could be used across the building chain, but also help with data comparison across different countries.”

Level(s) was designed to encourage users to think about the whole lifecycle of a building, providing a basis for quantifying, analysing and understanding the lifecycle. It goes beyond a building’s service life and value by including elements that happen before and after this stage, also providing indicators for recovery, reuse, and recycling of materials. When using Level(s), the user is sovereign: they choose how to implement Level(s), adapting it to their needs, pace, and understanding of the framework.

A Level(s) journey can start by implementing standard data as an entry point, and later working with more specific data items that even better represent their building project, as familiarity with the framework increases. The Level(s) indicators can also be inserted into existing certification schemes to ensure they comply with key objectives of sustainable policy actions.

“The end goal is that, by using Level(s), users are investing in a cost-effective framework that helps them future-proof their building projects in line with circular economy, whole life carbon performance and other green policy goals”, explains Kestutis Sadauskas. “We know from the Level(s) testing phase that the building sector sees the common language and metrics, and the fact that different stages of the building chain came together to find a common solution, as an important added value of this framework. In a way, are not just harmonising data and metrics: we are also harmonising the built environment’s vision of a sustainable future.”

The Level(s) framework started being developed back in 2015 by the European Commission’s Directorate-General for the Environment (DG ENV). It started as a great collaboration between a large number of building professionals, and it benefitted from pan-EU knowledge and expertise. The publication of the Level(s) beta version in 2017 marked the beginning of the framework’s testing phase. Between 2017 and 2019, the Level(s) indicators were tested by more than 130 projects (both residential and non-residential, in new built and renovation) in 21 EU member states.

Among the Level(s) testing audiences were manufacturers, investors, and property developers – who were particular keen to assess Level(s) added value to sustainability, circularity and quality of life.

The results and findings from the Level(s) testing phase have been crucial to develop and advise on the final version of the Level(s) framework. This final version will ensure a streamlined assessment and reporting process. It will also facilitate a quicker generation of comparable data, thanks to its provisions for knowledge-sharing across countries, companies, and throughout all stages of a building project.

With the official Level(s) framework about to be launch, it is important to spread the word and facilitate access to this framework for all building sector actors, big or small.

“The first step for investors and property developers will be to start requiring projects teams (designers, developers, …) to deliver documents and information using the Level(s)-based assessment; and using the matrix to report back on the progress of the project from the early phases in particular.” Recommends Panu Pasanen. “Level(s) will help in understanding the impacts of decisions and how projects are doing in terms of building sustainability.”

Building sector companies can also learn more about Level(s) through the upcoming Level(s) Stakeholder Briefing Sessions. This fully digital series of events was developed to better inform building sector entities about the benefits of Level(s), and to help new users as they begin their Level(s) journey.