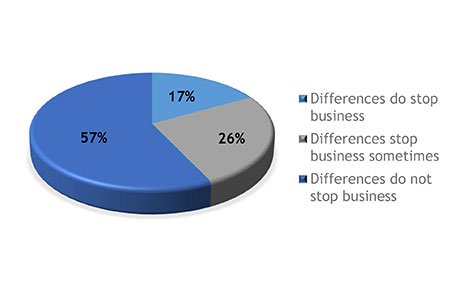 The European demolition contractors give a very high importance to regulations, legislation and norms in the business.

More precisely, in the areas of health and safety, environmental aspects and technical planning and execution, the importance of standards and regulations is way above average.

The difference in legislation and regulation in the same country between different regions is an aspect worthy of consideration.

55% of European contractors find major differences between regions of their country related to demolition work and activities. 45% find only small differences, but differences in any case.

These differences directly stop business for 17% of European demolition contractors.

26% have sometimes had their business frustrated because differences in regulation and legislation related to demolition work.

Finally, for 56% the differences do not stop Business.

EDA currently works in a new edition of this report, where the contractors related with the European industry can participate answering the two phases of the study.

In order to thank participants for the time spent answering the questionnaire, EDA would provide those who answer the survey with a 20% discount (for the first phase) and a 30% discount (for the second phase) on the Conference ticket of the EDA Annual Convention 2016  that will be held on June 9th – 11th, 2016 in Glasgow, Scotland, (UK).

The two discounts provided will be accumulated.

The survey has been translated to 13 languages to avoid mistakes and misinterpretations, which means the important European character of the Demolition Industry report has got.

All responses to the questions are anonymous, no identification data of the company is asked, and an overall analysis of the data will be made.

Novelties of ARDEN EQUIPMENT at BAUMA SMH, exhibitor in the EDA 2016 Annual Convention
Scroll to top